How will YOU be remembered? 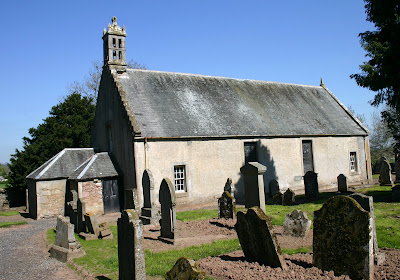 It's a while since I've visited Tibbermore Church, but on my way north last week I found time to stop off there. Call it a curling pilgrimage if you like! Let me explain.

Tibbermore Church, near Perth, dates from the early seventeenth century, although a previous structure dedicated to St Mary existed during the late middle ages. The earliest monument in the church is a large stone tablet set into the aisle wall, erected in 1631 by Sir James Murray of Tibbermore to his family. The church itself has a number of interesting features and the churchyard has many old gravestones. You can read more about the church here.

The church has not been in use for more than twenty years. It looks neglected and obviously requires repair and conservation.

James Ritchie farmed at Cairney and died in 1840. One has to imagine that he was a bit of a character, for on his gravestone, built onto the west wall of the church, are curling stones, crampets and a broom. These sit on top of a sarcophagus, and a carving of the farmer's prize winning bull! This monument seems to be unique in depicting the sport of curling. 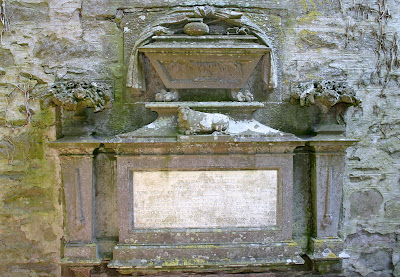 The stones have scallopped decoration, and are single-soled, the handle inserted into the top of the stone offset from the centre. Crampets were tied around the players shoes, to provide a stable footing during delivery, and while providing a good grip must have made a real mess of the ice surface!

What's the future for this piece of curling history? Tibbermore Church is now owned by the Scottish Redundant Churches Trust. The fund raising efforts of that organisation seem to be currently directed towards Cromarty East Church, Ross-shire, which was featured on the Restoration television programme. Hopefully though Tibbermore, with its curling connection, will not be forgotten.
Posted by Bob Cowan at 15:50

Check this link for the most recent Curling Today news